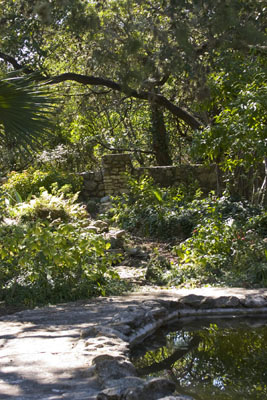 A tranquil, shaded oasis awaits on the border of Tarrytown, where peacocks perch on rooftops and sashay through ornate gardens. The birds are one of the many reasons that Mayfield Park, a nature preserve near Lake Austin, feels enchanting and serene. It’s common to see brides-to-be poised near water lilies and toddlers scuttling after birds (all being captured by cameras, of course); many locals have visited Mayfield, but few know how the plot of land and the house that occupies it came to be.

Mayfield’s aura can be credited to its builder, Allison Mayfield, and its gardener (his daughter), Mary Gutsch. Mayfield purchased the wooden, twin-gabled cottage and its surrounding 23 acres for his family in 1909, hoping it would serve as their summer home. The lavish purchase, which cost roughly $1,305, could only be made a prominent figure like Mayfield. At the time, he was Chairman of the Railroad Commission and former Texas Secretary of State.

He and his wife had one child, Mary Frances, who married Milton Gutsch in 1918. As a young couple, Mary and Milton moved into the cottage in 1922 and added three large porches to the house, giving it the bungalow-like quality it carries today. The couple enriched the ground together. Mary designed the gardens, and Milton directed the building of the stone walls, ponds, and garden features with the help of Steve Arredondo, the family’s resident gardener. He introduced plants such as Sabal Palms (from the Rio Grande Valley), which are now one of the preserve’s strongest features. 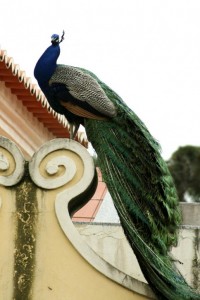 In 1935, two Blue India Peacocks were given to the Mayfields as a gift from friends. The peacocks bred, more were bestowed, and by 1950 the grounds held 35 peacocks of four different varieties. The birds that roam the park today are direct descendants of that first gift, though now only two varieties can be found.

With the help of Central Austin volunteers, the area has been restored and maintained over the past several decades and is free and open to the public. There are many Austin luxury homes for sale near this area; ask an Austin realtor about the other attractions in West Austin that make it one of the most refined and historical areas of the city.