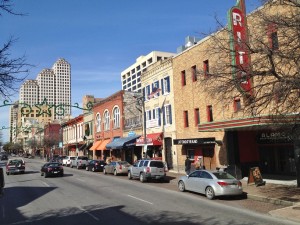 Local company (and favorite) Alamo Drafthouse has made Fast Company’s list of the “World’s Top 10 Most Innovative Companies of 2015 in Hollywood.” They were named number five for “reimagining the cinema experience” while becoming a “multimedia empire.” The top four include HBO, Netflix, Marvel, and Comedy Central.

Fast Company noted Alamo Drafthouse’s “intense focus on quality and the customer experience,” referring to the Austin-based company’s strict no-talking and no-texting policy, as well as food and drink delivered to viewers’ seats.

Eight new Alamo Drafthouse cinemas have opened in the past two years, with a goal of 50 cinemas by 2017, and their revenue was up by nearly 3 percent in 2014, despite an industry-wide decrease. They also have expanded their businesses, with Drafthouse Films distribution, Mondo posters, and Fantastic Fest film festival.